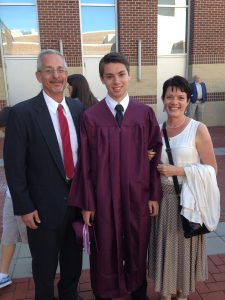 Imogen and her husband, Andy, celebrate their son’s graduation from high school, June 2014

When my son was still in preschool (he’s now graduated from high school!) I spent a few days doing major yard work. At the back of our yard at the time, in the suburbs of Richmond, Virginia, was a completely natural area full of trees, and full of all the weeds and underbrush that go along with it. I set out to clear all that out of there! I pulled huge root systems out with all my might, and worked for hours on end. I never thought to think about my body, until my neck started to hurt – a lot. It hurt so much that the pain that started at my neck wrapped all around my head right over my eyes. I had to stop everything. I popped Excedrin like it was going out of style. And I went to see my doctor.

My doctor prescribed anti-inflammatory medication and muscle relaxers. All that helped in the short term, but I couldn’t ever seem to get off them completely, and flare ups became more and more frequent. My doctor gave me neck exercises, which I did religiously every day. My doctor actually suggested I tried magnets, so I did. I had a necklace which I wore all the time, a pillow with magnets inside and a magnetic neck wrap. Nothing seemed to help for long, and the pain kept coming back. And, during this time I probably tried at least four different “neck” pillows ….

My doctor referred me to a chiropractor. I had adjustments at first three times a week, then twice a week, and then every week, for over a year. I did get some relief from this at times, especially in the beginning, but as with everything else the pain just kept coming back, and it was getting worse. Sometimes it was so bad I’d be out of it for three days. It was really affecting my life. I started getting massages as well. And still the pain got worse. It affected what I could do with my family, my energy level, how available I was to my son and husband and friends. It had become truly debilitating.

My lowest point was after a short trip to the mall with a friend (we were probably there for maybe two hours) and when I got home I was in a lot of pain. I felt hopeless and I wept. How could such a normal activity as going to the mall do this to me?

A few weeks later I was on the phone with my mum in England and she recommended I try the Alexander Technique (which she had just started herself, also for neck problems). I really had no idea what it was, but at that point I was willing to try anything. I looked it up and found that there were two teachers in Richmond and called them both up. One had openings so I booked a first lesson.

In my first Alexander lesson my teacher worked with me to help me let go of tension and improve my overall coordination (not just my neck, my whole body) so that my whole body was working together more efficiently and with less effort. Part of the lesson was spent doing what’s called “table work” – I lay down on a massage-type table while my teacher used both words and her hands to encourage me to let go of habitual holding patterns. She used a very light touch which was inviting rather than manipulative. With her hands-on guidance we also worked on sitting and standing and the movement of getting in and out of a chair. I was moving in a very different way from usual, and I felt lighter and freer, though I didn’t really understand what was happening.

What really made an impression on me was that this was something I could learn for myself. I felt immediate relief and hope that there was a way for me to gain control; that I didn’t have to be subject to the whims of my unruly body; that I could learn, as I understood it then, a way of moving that was lighter and used less effort; I saw a way out of my downward spiral. I spontaneously gave my teacher a hug at the end of that lesson – I was so grateful!

I had weekly lessons for several months and experienced many gradual changes as I began to incorporate what I was learning into my life. As well as a gradual reduction in my neck issues, one of the first, unexpected changes I noticed after a few months was that a callous I’d had on my left foot for at least two years (I’d tried on and off using those medicated bandages to get rid of it to no avail) had completely disappeared. I could only attribute this to Alexander Technique. I was beginning to feel so much more balanced in my body, and I believe the pressure going into my feet had completely changed and my weight was now much more evenly distributed. More importantly I began to feel in control of what was going on and that my relationship to my neck pain was gradually changing. I was not so fearful anymore, and felt generally more optimistic and able to take on new things.

During my son’s first year of Kindergarten I decided I would like to train to be an Alexander Technique teacher. I could not imagine anything better than a job that required you to use your body with no excess tension! AND, I would be teaching people how to solve their own body problems too. The nearest training course was in Charlottesville, Virginia, so for the next three years I commuted 70 plus miles each way for three to four days per week. Despite the commute the experience was truly wonderful and I felt myself transform on many levels. I had more energy, I felt younger and more positive, and, needless to say, my neck problems were receding all the time.

I graduated from the Alexander Technique Training Centre of Virginia in June 2006. Less than a month later I moved with my family to Wilmington, Delaware. Since then I have been teaching the Alexander Technique to a variety of people in my home studio in north Wilmington and at other locations throughout the Brandywine Valley area of Delaware and Pennsylvania. For my own practice I learned how to design websites (starting with this website, www.imogenragone.com, which continues to evolve), and over the past few years I’ve also created websites for over 70 other Alexander Technique teachers, as I feel strongly that as a profession we need a solid web presence so this work can become more known (see www.alexandertechniquewebsites.com).

This site uses Akismet to reduce spam. Learn how your comment data is processed.

Simple tips to move you from stress to ease, so you can be more: